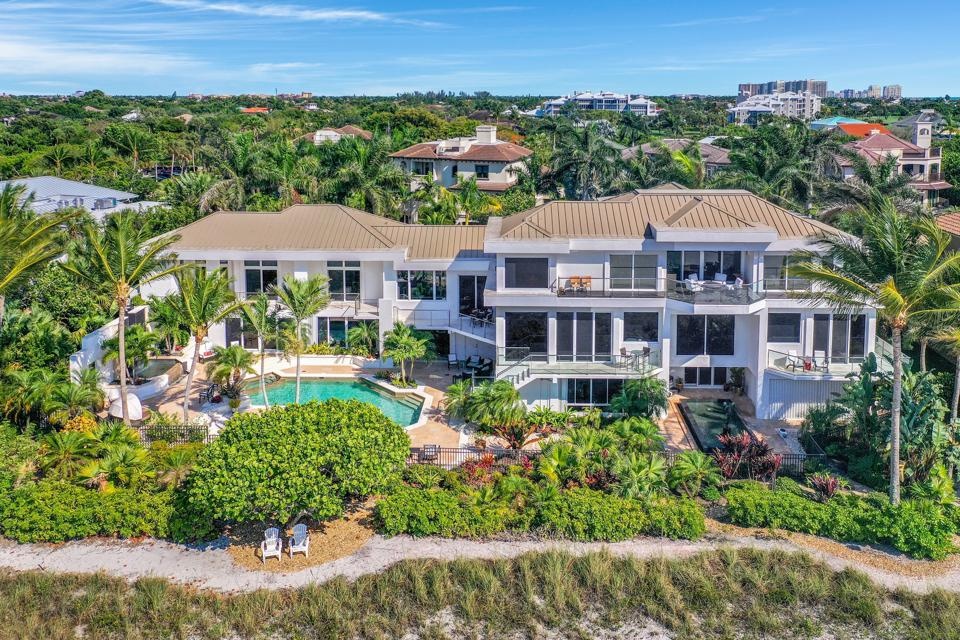 A contemporary waterfront mansion on Hideaway Beach has hit the market for $14.25 million.

A rare offering, it's the highest-priced residential listing on Marco Island since 2005 — before a real estate boom went bust in Southwest Florida.

As the region experiences another kind of real estate boom, driven by real demand, not hysteria or irrational exuberance like the last one, housing prices are rising across the board at all ends of the market.

So the near-record listing on Marco doesn't come as such a big surprise to Realtors on the island.

On the island, there's only one place where you can have a home directly on the beach and that's where this mansion sits on a double lot, with 180

feet of beach frontage, directly on the Gulf of Mexico,  which the agent describes as not only "extremely rare," but "drop-dead gorgeous."

"Built in 2005, it's ultra-contemporary," she said. "it was kind of built before its time, if you will. It's just absolutely stunning."

Contemporary features include a 30-foot high foyer and a majestic staircase with glass, stainless steel railings and marble floors.

Walls of windows throughout the home offer views of the waterfront — and sunsets.

The three-story, custom estate — at 202 Beach Drive — spans 9,505 square feet, under air. It has five bedrooms and eight bathrooms, including three half-baths, or powder rooms.

A great room, framed with glass, includes a wet bar and fireplace.

The top floor features an office and gallery, with special lighting to display prized artwork.

There's more to brag about, including a master suite with a spa-like bath, stone fireplace and 10-foot sliding glass doors that open to a private outdoor living room.

"There's so much glass. It's so cool," Rogers said.

Outdoors, there's a saltwater pool, a party room with a kitchen and a poolside gathering spot with a fireplace. Five terraces overlook the estate.

She started getting calls from interested buyers and their agents within days of listing the property.

The high-end market, in particular, continues to perform well across Southwest Florida.

Both Lee and Collier counties have seen all-time home prices shattered this year. A sprawling compound in Port Royal fetched $52 million, while an island estate on Captiva recently brought $17.15 million, beating its own record.

Like no other, the current housing market is fueled in part by the coronavirus pandemic — a pandemic that has driven more Americans to less crowded areas, such as Marco Island, Naples and Fort Myers.

Make no mistake it's not a repeat of Southwest Florida's last real estate boom that went bust in 2006, said real estate market expert Denny Grimes in a recent interview.

That's because the buyers aren't investors looking for a fast buck, he said, they're real buyers who want to live in the homes and truly qualify for mortgages — and can afford to pay in cash in many cases.

Ultra-low interest rates continue to contribute to the exuberant demand, although at this point Grimes sees that as "old news," as they've been around for years now.

Last month, his team at Keller Williams Realty in Fort Myers sold nearly 60 homes, reflective of a market that is "superheated," due in large part to the pandemic, which has opened up more doors for remote work, making it possible for more Americans to move and live wherever they want.

Southwest Florida, with its small-town feel, is a beneficiary of the larger movement out of more heavily populated or higher-tax states, such as New York and California. The movement actually started before COVID, but has picked up some serious steam since the pandemic erupted more than a year ago.

Reflecting those trends, Realtors on Marco have seen more buyers looking for permanent homes on the island, rather than just seasonal ones,  Rogers said.

"Everything has changed," she said.

Jim Prange, another Realtor for Premier Sotheby's on Marco, agrees.

He said he's noticed an influx of buyers not just from New York and New Jersey, but from such states as Oregon, California and Texas.

"They are coming from a little bit of everywhere," he said.

"We just recently closed on a house for almost $5 million," he said. "I never met the guy.

He bought it over the phone, without seeing the home, It was through Facetime."

The buyer made an all-cash offer over and above the list price, to ensure he didn't miss out, Prange said.

"This time people are buying one property," he said. "They are buying what they want and they are paying cash, even with interest rates as low as they are. It's a crazy market."

On Marco, the market picked up steam in April of last year, after taking a brief pause from the pandemic scare, Prange said.

Early buyers, he said, got some of the best deals.

"People who bought in November 2020, they could probably sell their properties for 50% more today," Prange said. "There were some really great values out there that were sitting for a while."

Last May, there were 61 closings on the island through the multiple listing service, he said, reflecting fewer contracts written in March when the pandemic hit. On average, closings can lag contracts by 45 to 60 days.

With a week left to go, closings for this May had already reached 145, more than double the number seen a year ago.