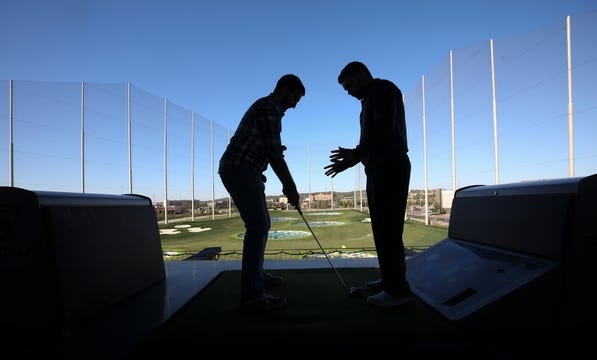 Topgolf, with its climate-controlled playing bays, is expected to open next spring in Fort Myers, according to a company representative.

Construction is underway behind the Lowe's and Hobby Lobby on Six Mile Cypress and Colonial Boulevard, said Todd Waldo, Topgolf's director of real estate development. Waldo spoke during a Ward 6 community meeting Thursday afternoon.  "We are on schedule and looking to start building construction later this summer," Waldo said. "That will get us to a point where we will be opening sometime next spring."

The attraction is being built on a site overlooked by the highway. The Lee County Property Appraiser shows the parcel sold in December for $4.9 million. The venue will run parallel to Interstate 75, with the driving range facing north, according to Waldo.

Waldo said the project is valued at over $20 million and is expected to bring 200-plus construction jobs to the city with an estimated 300 jobs once it opens. Topgolf is a golf venue where participants can try to land golf balls on specific targets to earn points. The attraction also features an extensive food and drink menu, with televisions and music for players to enjoy a party-like atmosphere.

Topgolf has 58 locations across the globe, and at least three others in Florida, including in Tampa, Orlando and Miami. Waldo said the attraction had 17 million visitors worldwide in 2018 and is expected to attract 250,000 in Fort Myers in its first year.  "I realize the impact for the town financially is probably a very good one but have you considered what this is going to do (to traffic)," asked Mike Lamm, a resident who lives in Pelican Preserve off Treeline Avenue. Lamm said it took him 45 minutes to get to the Gulf Coast Church of Christ from his home, a distance of about four miles.

"I'm very curious with all of the open space they have between here and the airport why they didn't choose a more logical site," Lamm said. "I know what the traffic is now and I know what it's going to be like then."  Fort Myers City Manager Saeed Kazemi said there are three Florida Department of Transportation projects, including a diverging diamond interchange at Colonial and I-75, in the area that will address those needs.  "During construction we have to have patience," Kazemi said. "City of Fort Myers is doing great; this is your area of Ward 6. I am hoping this is going to continue to grow."