Despite coronavirus SWFLA thrives in May 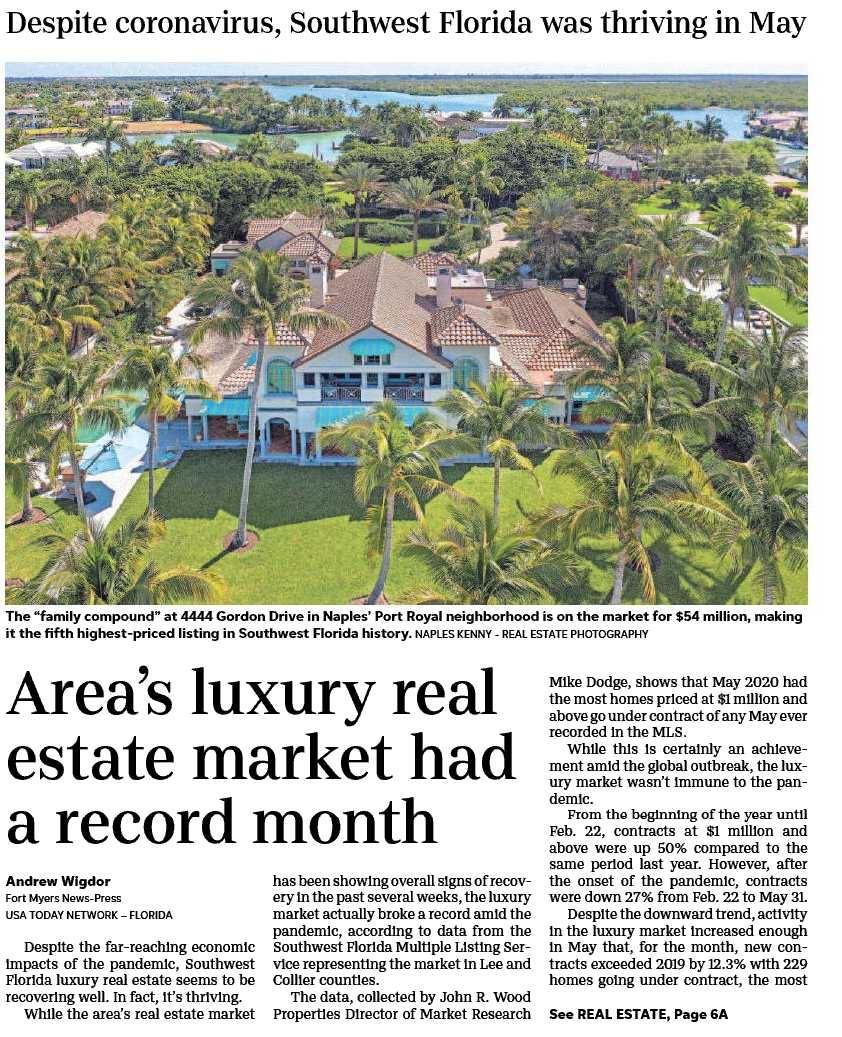 Despite the far-reaching economic impacts of the pandemic, Southwest Florida luxury real estate seems to be recovering well. In fact, it’s thriving.

While the area’s real estate market has been showing overall signs of recovery in the past several weeks, the luxury market actually broke a record amid the pandemic, according to data from the Southwest Florida Multiple Listing Service representing the market in Lee and Collier counties.

The data, collected by John R. Wood Properties Director of Market Research Mike Dodge, shows that May 2020 had the most homes priced at $1 million and above go under contract of any May ever recorded in the MLS.

While this is certainly an achievement amid the global outbreak, the luxury market wasn’t immune to the pandemic.

From the beginning of the year until Feb. 22, contracts at $1 million and above were up 50% compared to the same period last year. However, after the onset of the pandemic, contracts were down 27% from Feb. 22 to May 31.

Despite the downward trend, activity in the luxury market increased enough in May that, for the month, new contracts exceeded 2019 by 12.3% with 229 homes going under contract, the most ever in the month of May and beating out last May’s 204.

May’s numbers have, for the most part, shown a steady increase, with the five years prior to 2019 in Southwest Florida sitting at: 191,189,134,165 and 162. And it appears that even a global pandemic could not stop that momentum.

“That’s a market that clearly had a lot of demand, and when things changed, even though the buyers hit the big fat pause button, that doesn’t mean the desire to make something happen went away,” Dodge said.

He attributes the increased numbers to people, to a degree, becoming comfortable with the new normal and deciding to resume their home hunting.

“I think what’s happening in that $1 million-plus is really reflective of the overall market, in which buyers are saying, ‘This isn’t going to stop us ... We can deal with this.’” For the $1 million and up market in particular, Dodge attributes the uptick to the fact that this segment of the market was “already booming compared to the rest of the market.”

“It’s picking up where we left off,” he said.

As Dodge noted, other parts of the market are also recovering well, and in some cases, even beating out what was seen in 2019 after seeing big dips in the earlier weeks of the pandemic.

Showings last week were up 40% compared to the same week in 2019, and newly written contracts for all price ranges in Lee and Collier were up 18% from 2019 last week.

Closed sales have stayed below that of 2019 from early April to last week, but Dodge stated that closed sales generally occur 30 to 60 days after the contracts are written. Therefore, the closed sales are most likely more representative of where the market was several weeks ago.

“I have to think that in the coming weeks, we’re going to see those closed sales pick up,” he said.

She noted that March and April are generally strong selling months for the area but that many put their plans for travel and purchasing on hold when the pandemic hit.

Echoing Dodge’s statements, she said that those buyers’ desire to purchase in Naples “didn’t shift.”

“They still were very steadfast on getting something done,” she said.

And in addition to the people who were already planning on buying in the near future in Southwest Florida, Lefevre found that the pandemic was actually a motivating factor for some clients.

Certain scientists have predicted that a second wave of the virus will occur in the fall, prompting Lefevre to hear from some buyers who wanted to get ahead of that.

She noted some of these calls came from individuals who lived in densely populated areas that were severely impacted by the virus, such as New York and New Jersey.

Lefevre also heard from people who had previously hoped to move to Southwest Florida sometime in their lives but felt inspired to do so quickly after living through some of the pandemic.

“I heard from families five years earlier or 10 years earlier than their original plans because they wanted to get out of wherever it is they are,” she said. “Sometimes a big, life-altering occurrence shifts peoples’ frame of mind, and I did see some of that. I did see, ‘Why are we waiting? Why don’t we just do it now?’”
Lauren Melo, the president of the Naples Area Board of Realtors, pointed to the volatility of the stock market as a possible motivator for people to move money into real estate during the pandemic.

“I think a lot of people who had money in the stock market, it was such a roller coaster that it probably gave them ulcers, like it did all of us,” she said.

Therefore, she said, some may have decided to move money out of the stock market and into real estate because home values in the Naples area stayed high and increased during the pandemic.

Budge Huskey, the CEO of Premier Sotheby’s International Realty, attributed some of the success from May to “pent-up demand.”

He pointed out the entire market was up 20 to 25% above the previous year in the area in the first quarter of the year and that the luxury market was up even more than that.

“That demand didn’t go away,” he said. “It was simply postponed ... So what we’re seeing is a kind of pent-up demand that would have naturally continued in the first quarter that didn’t occur in April and the end of March. Now I think we’ll continue to see that as we move into June as well.”

He also said that some of the May customers were those who have been impacted by the pandemic in Northern states who are now jump-starting their plans to move to a sunnier climate.

“What we’re seeing is an even additional segment of customers who have ultimately, in their words, been essentially trapped in a home up North in typically bad weather,” he said. “They really have not had the ability to live a lifestyle for the last eight to 10 weeks.”

For Premier’s Naples region in May, sales of homes priced at $1 million and above were up 20% compared to last year, Huskey said.

“On the luxury side, the recovery seems faster,” he said.

Another factor that Huskey noted is the heavy focus his company and others in the area have now put on virtual options for buyers, such as virtual showings, virtual open houses and more online accessibility to photos and videos of homes.

He said that a number of contracts written in the last half of April and through May were for buyers who did not live in Naples and, in many cases, had never been to the home in person. Therefore, he said that the virtual methods of marketing have “accelerated” the recovery in Southwest Florida.

“Our job is to deliver just an extraordinary level of service, and that means not only in person but virtually,” he said. “It means giving customers the option to work with them however they wish to work.”

Thanks to customers now being familiar with these vir tual methods and the new normal of the pandemic, Huskey said that if a second wave is to occur, he doesn’t expect it to impact the market like the first one did.

“Last time was like turning off a tap because of the degree of uncertainty,” he said. “And real estate hates uncertainty. We have experienced it ... We know we can work with customers safely. We know we can complete transactions, and we didn’t have that (before).”