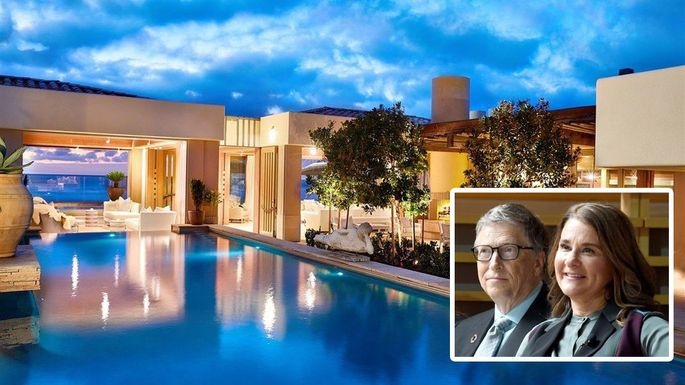 
The billionaire philanthropists Bill and Melinda Gates have purchased an exquisite beach house outside San Diego—splashing out on $43 million for an oceanfront mansion in the coastal town of Del Mar, CA. The prodigious purchase price makes it one of the largest sales in the area's history.

The luxurious six-bedroom, four-bathroom, 5,800-square-foot home was sold to the Gates family by Madeleine Pickens, a former wife of the billionaire oil baron T. Boone Pickens, according to the Wall Street Journal. The home originally landed on the market for $48 million in January 2019.

The oceanfront property was built by the architect and designer Ken Ronchetti in 1999. According to the listing details, the house is well-known as a city landmark and is considered "one of the most prominent coastal contemporary beach homes on the West Coast."

Wide windows throughout the living spaces open to the back patio, offering a seamless flow between the indoor and outdoor spaces. The large patio also provides awe-inspiring vistas of the Pacific Ocean.

Rich wood ceilings throughout the home evoke the feeling of being on an island, and the gorgeous pool beckons, should the owners desire to take a break from the salty ocean water.

This beach house is the latest addition to the former Microsoft CEO's portfolio of fabulous residences.

The family's main residence is a compound in Medina, WA, and they also own a horse property in nearby Rancho Santa Fe, CA, which they purchased several years ago for $18 million from Jenny Craig, founder of the weight loss program.

The family's love of horses also inspired a purchase in 2016 of a large plot of land in Wellington, FL, the equestrian capital of the Sunshine State.

Gates, 64, was recently back in the headlines in connection with a conspiracy theory claiming falsely that he was implicated in the spread of COVID-19.

While this has no basis in fact, the multibillionaire, who turned his attention to philanthropy a couple of decades ago, has donated $250 million toward fighting the virus.